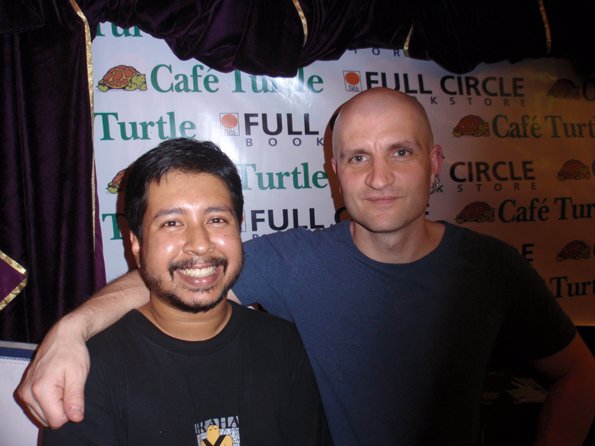 When I started writing Simoqin way back in 2001, I had this Word file called ‘Things to remember.’ There were many things to remember, chief among them excerpts from Michael Moorcock’s essay ‘Epic Pooh’ and several extracts from essays written by and interviews of that guy in the picture. And while Terry Pratchett was clearly the biggest inspiration in terms of worldbuilding, a lot of the things China’s said down the years, about monsters, about races, about stereotypes, about worlds, have all found their way into that ‘Things to Remember’ file and, eventually, into the books. Perdido Street Station and Un Lun Dun are easily two of the best books I’ve ever read, and if you haven’t read them, you really should. Once you’ve done that, you’ll also read all the other books without needing plugs from me.
So I was beyond delighted when Lit Sutra happened, and I got the chance to interview China and ask him many questions while trying to remain dignified and not beg for an autograph in front of everyone. I don’t remember ever being so nervous before an event before – not least because China clearly operates in a higher IQ zone than I do and uses words like ‘ontological’ with the kind of casual ease that I use words like ‘yeah’, but also because I wanted to, you know, learn stuff. But I think it went well.
Living and working as a writer, you often get the chance to meet really interesting writers, sometimes even great writers. But this was the first time I’d met someone who’d been a direct influence on the novels, and from whose work I plan to continue stealing many things (I already announced at the event that I thought the binjas were fair game, and that’s just the tip of the iceberg) and it was wonderful to be able to chat, to tell him he could swear as much as he liked on stage, and to thank him.
Ok. End of fanboying, back to work. Deadlines loom like kraken tentacles.

Writes books, comics, films, other stuff.
View all posts by Samit Basu »
« You will experience
How the years speed by »

4 thoughts on “One happy fanboy”